Poppies Restaurant is now OPEN DAILY again for Breakfast, Lunch and Dinner. Our menu starts a little smaller than the one below, and will grow as demand picks up. We ask for your understanding, and look forward to welcoming you, safely and in accordance with full health protocols. 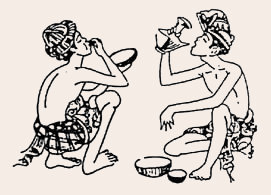 Vegetarian dishes are marked with (v)

All prices in thousands

Most of the following dishes have at least one spicy element, which you can easily isolate if you wish

"RIJSTTAFEL" (rice table)
A truly magnificent feast of small tasty portions of Indonesian delights from all around the East Indies. This was the colonial Dutch way to sample the best food of Indonesia, and Poppies guests can enjoy the same experience today ( please allow 20-25 minutes for preparation) Rp. 305 for two persons (the minimum) - add Rp. 175 for each additional person

GF Saté Rp. 68
skewers of marinated chicken, lamb, or pork served over hot embers at your table with a delicious peanut sauce and steamed rice

Sashimi Rp. 58
our own version of the delicious Japanese favourite, sliced raw red tuna and butterfish, with wasabi

Lobster Bisque Rp. 69
with pieces of lobster and a sweet basil froth

Prawn Boat Rp. 88
a baby papaya filled with pieces of prawn, avocado, mango and fresh mushrooms, then topped with prawns

Barramundi Florentine Rp. 115
poached fillet of barramundi with flamed white wine sauce, on a bed of spinach with Lyonnaise potatoes

Seafood Kebabs Rp. 125
with prawns, fish, and squid, served at your table over charcoal, with French fries and salad

GF Shish Kebabs Rp. 135
marinated, and served at your table over charcoal, with a tandoori sauce, sultana rice and salad

Pork Piccata Milanese Rp. 92
thin slices of pork loin sautéed in egg and parmesan cheese, topped with a tasty ham and mushroom sauce, and served on a bed of egg pasta

… and a selection of Curries :

Your choice of Penne, Spaghetti, or Fettuccine

Garlic Bread Rp. 33 with Cheese Rp. 39
favourites since the 70s, made our own way

all items may be served with Ice Cream, Home-made Yoghurt, or Whipped Cream  add Rp. 20

Banana Pancakes Rp. 35
with honey or lemon or jam

A selection of Ice Creams - mix and match Rp. 35


Home-made Yoghurt Rp. 35
plain, or with fresh fruit, with honey, with strawberries (as available), with chocolate

What makes Poppies so special is its wonderful staff. They truly are the nicest people we have met on our trips to Bali.